George Delacorte was born and raised in NYC where he also graduated from Columbia University and founded Dell Publishing. He became a philanthropist with a taste for whimsy, donating money to build fountains at Columbus Circle and Bowling Green, an illuminated geyser on Roosevelt Island, and the statue of Alice in Wonderland in Central Park.

Of the statue, he said, “It just seemed a nice thing to have in the park. On Sunday mornings I watch the kids climbing over it, under it. It’s a regular parade.”

The Delacorte Clock was dedicated at the north end of the Central Park Zoo in 1965. Fernando Texidor provided the  design and Andrea Spadini created the bronze sculptures. There are six animals who dance around the clock, playing musical instruments: A bear playing tambourine is joined by an elephant on accordion, a hippo on violin, a kangaroo and her baby each playing a horn, a penguin beating a snare drum and a goat playing the pipes. Every hour on the hour a pair of hammer-wielding monkeys ring a bell and the menagerie dances around the clock. 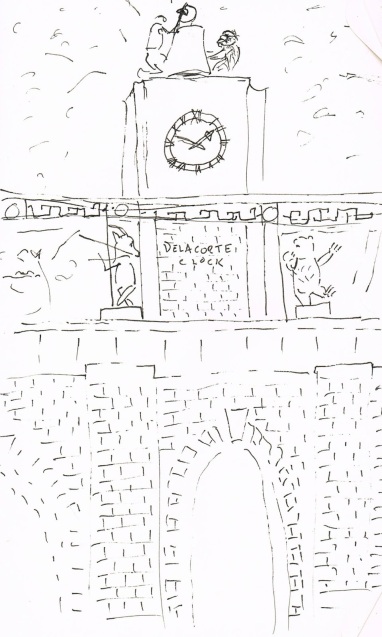