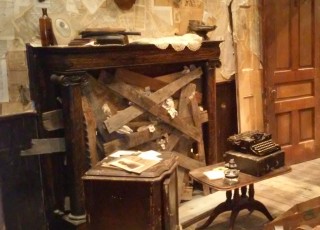 The artist Titus Kaphar has created something simultaneously fascinating and creepy as hell in his installation “The Vesper Project,” on display through December 13 at the Katzen Art Center museum on the campus of American University in Washington, DC. 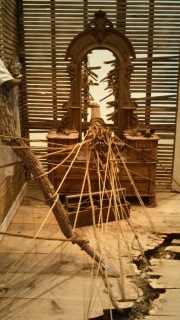 In the New Haven-based artist’s telling, a man named Benjamin Vesper experienced a psychotic break, attacked one of Kaphar’s paintings, was arrested, and admitted to the Connecticut Valley Hospital. The story of Benjamin Vesper’s life and history are recounted with the detail of a classic Gothic novel through the artifacts of the 19th Century building that was home to the Vesper family. There’s a sick familiarity in such once-common objects as a typewriter and a phonograph. Newspapers, rope, and splintered wood cover the walls and floors, immersing the viewer in Kaphar’s art. The observer becomes participant in the art as wooden floors creak underfoot and musty air invades the nostrils. 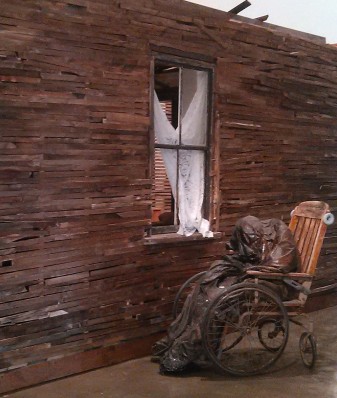 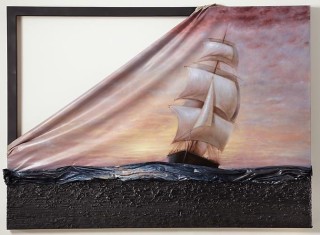 In addition to The Vesper Project’s macabre house, some of Kaphar’s paintings are on display, including “Watching Tides Rise,” from 2012. It is an oil and tar creation that drapes the canvas from the frame. The artist’s frequent incorporation of crumpled newspapers and cut, folded, and bunched canvas challenge viewers expectations and preconceptions about the place of fiction and boundaries in art.