Skip to content
“We’re actually recharging our batteries: me from the audience and their response, and the audience from me and my songs and ideas. We’re recharging our batteries so we can go back out there and fight the good fight, get our own little space wherever we are. I’ll do my bit, and you’ll do your bit, and ultimately we hope to bring that to a time when we can bring about real change.”
Billy Bragg 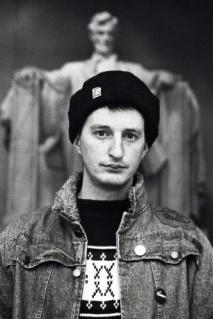 I don’t remember how I first heard about Billy Bragg but I’m sure the first album I heard was Workers’ Playtime. He’s made many other great albums but that one is still my favorite. You never get over your first love. I don’t anyway.
Billy Bragg’s music embodies a strange combination of familiarity and originality. The sentiments in his writing and passion in his singing are familiar to anyone who listens to Phil Ochs or Bob Dylan but there is a raw edge to his sound that owes more to The Clash or Ramones than to any folkie. It sometimes sounds like he broke his pick but, because his message is too important to stop, he plows ahead with broken shards. His voice is as gritty as his playing – untrained, insistent, and undeniable.
He also has his own way with words.
The temptation
To take the precious things we have apart
To see how they work
Must be resisted for they never fit together again
It’s a temptation he does not resist when it comes to words. He likes to take them apart and rearrange them.
Take the M from me
And the Y from you
Out of FAmILy and it all falls through 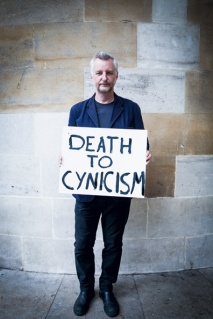 It isn’t easy to beat your head against walls of human suffering and apathy without falling victim to cynicism. Somehow, Billy Bragg found a vaccine for cynicism and is traveling the world giving out inoculations with his guitar.
I was lucky enough to get my shot a few weeks ago at an event commemorating the 50th Anniversary of Woody Guthrie’s death. Here’s Billy performing Guthrie’s “Slipknot,” a song about lynching which he introduced with a story of its continuing relevance, reflected in the protest of NFL players taking a knee during the playing of the national anthem in a gesture that has become a flashpoint in our country’s ongoing state of denial about racial injustice.
It would be an injustice to Billy if I only show him singing a cover, so here’s one of his own. Now that our “sexual politics have left me all of a muddle,” his song Sexuality is depressingly-relevant©. Co-written with Smith’s guitarist Johnny Marr and co-starring Kristy MacColl, it is one of his most pop songs but still expresses his progressive values. As we learn further every day, the personal is political.

I’m sure that everybody knows how much my body hates me
It lets me down most every time and makes me rash and hasty
I feel a total jerk before your naked body of work
I’m getting weighed down with all this information
Safe sex doesn’t mean no sex it just means use your imagination
Stop playing with yourselves in hard currency hotels
I look like Robert De Niro, I drive a Mitsubishi Zero