The first time I heard Scott Joplin’s music it was played by Marvin Hamlisch on the soundtrack to the 1974 film The Sting. By that time Joplin had been dead almost 60 years.

He composed 44 ragtime pieces as well as a ballet and two operas and is considered the king of the music that he popularized, identified by its syncopated bass and melody lines played in ragged time, or ragtime.

Joplin played at the 1893 World’s Fair in Chicago and by 1897 ragtime was a national craze. His first and most popular song, Maple Leaf Rag, sold over a million copies in sheet music form. The sound of his compositions evoke a unique moment from a century ago. The St. Louis Dispatch called it “a veritable call of the wild, which mightily stirred the pulses of city bred people.”

Maple Leaf Ragand Pineapple Rag are two of his most popular songs but my favorite is the haunting piece he named Solace. 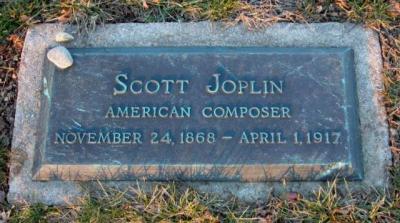 He died 100 years ago in NYC and was buried in an unmarked grave in St. Michael’s Cemetery in East Elmhurst, Queens. 57 years after his death, as his music once more climbed the charts due to the success of The Sting (reaching #3 on Billboard’s Hot 100), the American Society of Composers and Performers placed an overdue marker on his grave.