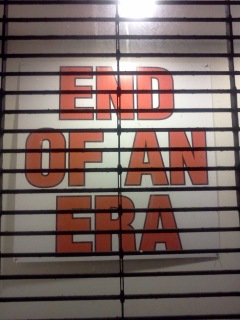 One day in 2015, my soul-mate asked me, looking back on our many years together, which year was my favorite, and I told her 2016 because I try to believe the best is yet to come. I couldn’t have been more wrong. 2016 was a horrible year for so many of us, in so many ways. I don’t remember ever feeling such desperation to turn the page on a year. Still, if she asked me today which was my favorite I’d say 2017.

A lot of garbage has built up in my life over the past few years and the time has come to throw it out. It will take a revolution of will to get rid of the garbage and replace it with something new and better. So, in 2017 I will:

To anyone I’ve hurt, annoyed, or made uncomfortable, I ask forgiveness.
To anyone who has hurt me, grudges are another thing I’m kicking to the curb.

As 2016 goes by, I am letting bygones be bygones
Happy New Year