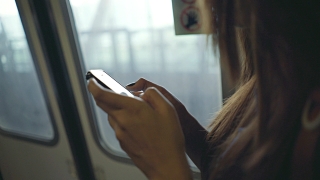 Jasmine blamed herself. That was her default position. In her mind, it was her excitement at having a boyfriend, after such a long lonely time, that made her laugh too loudly, and too freely. She was showing Robert a video on her phone, to see if he thought it was as funny as she did, to test the compatibility of their senses of humor. She was oblivious to the impropriety when the racket she was making rolled from the platform into the enclosed space of a subway car. Caroline was there to remind her.

It was the ‘do we?’ that offended Robert’s ear – the way Caroline sought to turn their fellow passengers against Jasmine. His anger melted into sarcastic aggression. That was his default position. He put his arm around Jasmine’s shoulder. “Don’t let her get you down,” he said, “that’s just what she wants. That’s what she lives for – knocking people down. It’s not just you. I’m sure her friends and family and co-workers all dread it when they see her coming. She’s the type who thinks she’s saying what everyone else is feeling but they’re afraid to say.”

He might be right, Jasmine thought. Or they might both be assholes. She put in her plugs to listen to the rest of the video and laughed softly to herself.