Skip to content
Archibald Motley was born in 1891 in New Orleans. His travels would lead him over the years from Bronzeville in Chicago, to a year in Paris on a Guggenheim Fellowship, to Mexico in the company of his nephew, the writer Willard Motley, and through January 17 of next year in an exhibit at the Whitney Museum of American Art.

One of the first paintings to bring him notice was the 1927 piece Mending Socks which was voted the most popular painting at the Newark (NJ) Museum. For obvious reasons. His skill as a portrait artist is impossible to ignore. The colorful composition highlights an eye for detail that would have made him an excellent still-life painter but the complex and compelling depiction of human subjects arouse the curiosity of the viewer in a way no bowl of fruit or vase of flowers could. Mending Socks is actually a portrait and a half: that of his grandmother and the woman who owned her as a slave.

One of his most powerful portraits is Brown Girl After The Bath from 1931. In a twist on classical depictions of Venus he complicates the view of the subject and its viewer by reflecting their gazes through a mirror. As in some of his other paintings, including Between Acts and Nude (Portrait of My Wife), Motley explores the female nude with an unflinching eye. One of his specialties was depicting the various skin tones of his subjects. As he explained, “They’re not all the same color, they’re not all black, they’re not all, as they used to say years ago, high yellow, they’re not all brown. I try to give each one of them character as individuals. And that’s hard to do when you have so many figures to do, putting them all together and still have them have their characteristics” 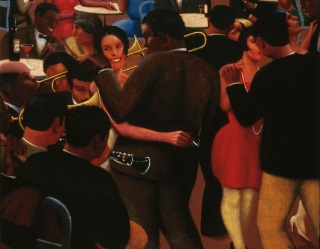 In addition to his portraits he captured the exuberance of nightlife with an expert eye. The joy, danger, and passion of late nights, music, dancing, and drinking are barely able to contain themselves on his overflowing canvases, like Blues from 1929.

The final canvas in the Whitney show, The First One Hundred Years: He Amongst You Who is Without Sin Shall Cast the First Stone: Forgive Them Father For They Know Not What They Do, is a work as complicated and challenging as its name. It took him ten years to paint – from 1963 to 1972 – and contains portraits of John F. Kennedy, Martin Luther King, Abraham Lincoln and Satan. It is a striking departure from the joyful debauchery and somber portraits of most of his work and is a fitting end piece to this fascinating exhibit.