John Singer Sargent was the top portrait artist of his age, an age when photography and impressionism were having profound impacts on the visual arts. He combined realistic detail with an emotional depth that still resonates and can be experienced at the Metropolitan Museum of Art through October 4. 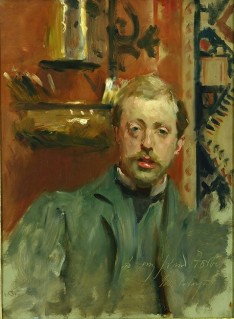 The subjects for his portraits include patrons, friends and his fellow artists. The painting at left, of Charles Stuart Forbes, has a depth of both color and mood that can’t be captured by a camera. Splashes of white on the bottom lip and forehead of the subject gives him the moisture of a living man. The artist scrawled across the bottom of this apparently unfinished painting, “To my friend Forbes.” We should all have such friends.

The subject of the portrait at the right is the actor Edwin Booth. He became manager of the Winter Garden Theatre in New York City in 1863. On November 25, 1864, Edwin and his two brothers put on their sole performance of Shakespeare’s Julius Caesar. Outside the theater the clanging of fire alarms whipped the crowd into a frenzy. According to the next day’s New York Times: “but for the presence of mind of Mr. Booth, who addressed them from the stage of the theatre, telling them there was no danger, it is fearful to think what would have been the result.” The fires surrounding the theater were the work of Confederate sympathizers trying to burn New York to the ground. Firefighters saved the city. Edwin Booth saved Abraham Lincoln’s son, Robert Todd Lincoln, whose foot slipped as the the two men stood next to each other on a train platform. Unfortunately, nobody could save the president from Edwin’s brother, John Wilkes Booth.

The performance of Julius Ceasar was a fundraiser for a statue of Shakespeare that still stands in Central Park near East 66th Street.

By 1913, Sargent had tired of portraiture and devoted most of his artistic energy to landscapes. When he was asked to paint a portrait of his great friend Henry James, in honor of the novelist’s 70th birthday, he couldn’t refuse. It had been years since he had painted a portrait and was afraid that he’d lost his touch. You can decide for yourself, but the subject said it was “a living breathing likeness and a masterpiece of painting.”

In exterior works reminiscent of his friend Claude Monet and interiors that bring to mind Edward Hopper, the scope of Sargent’s talent is on full display in this exhibit.

And it wouldn’t be a proper presentation of Sargent’s portraits without his most famous one, the stunning and controversial portrait of Madame X. He spent over a year painting this portrait of Madame Pierre Gautreau but she never sat for him as his other subjects had. In fact, she hadn’t given him permission to paint her and when he displayed the work in Paris in 1884 the reaction was so negative that he moved to London. The original painting had the strap on her right shoulder sliding down her arm. He changed his painting to pull up her strap but the scandal had already been unleashed. Despite the furor, when he looked back on it 30 years later he said, “I suppose it is the best thing I have done.”

The riches of The Met are always worth a visit and if you can fit it onto your calendar before October 4, you’ll be rewarded with this unique exhibit.