Skip to content
My review of the incredible Future Is Now show at 60 Orchard Street is posted at the Arte Fuse website. The show runs through January 20. 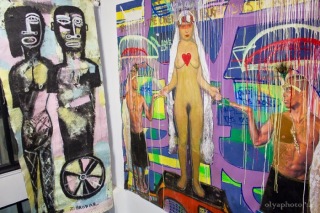 In addition to the galleries popping up like mushrooms in the neighborhood below Delancy and East of Forsythe, there’s also a ton of little shops, cafes, and bars (Merchants & Advocates of Great Beer, Green Frog, The Cast – leather/rock’n’roll clothing, next door to AW Kaufman’s designer lingerie shop). We stopped at Dudley’son the southwest corner of Orchard and Broome for $3 tap beers and ciders as well the other happy hour specials they have every M-F from 5-7