Weather Warlockonly plays during sunrise and sunset, so it was dark and cold when they hit the outdoor stage at Secret Project Robot in Bushwick the day after Thanksgiving. Fortunately for the assembled horde they were serving hot toddies at the tiki bar. The cold and dark also offered an easy excuse to fondle your significant other, or any other of significance who was willing.

Secret Project Robot, at 389 Melrose Street, is as much artists’ clubhouse as gallery. The interior is a blazing explosion of colors and characters. A black-light room to the rear of the studio is complete with a Terminator 2 pinball machine, racks of classified commix, and a door covered with plush, stuffed animals.

Weather Warlock is the name of the band and also of an analog synthesizer that turns weather into music, the creation of Quintron, one of the band’s members. The ominous rumble of the synth filled the outdoor space for hours before the band – Quintron and Nils Cline on guitar, Sean Ono Lennon and Steve Shelly on drums, and Paula Anderson and Luke Stewart on sax – complimented it with their own sound. The music’s free form was a comfortable fit with the backyard-barbeque surroundings, as the band lurched between snatches of melody and improvisation that allowed each musician their own space to contribute in their turn. 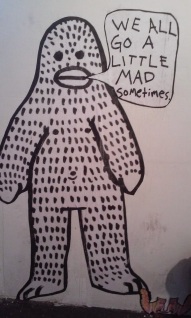 The frozen audience ranged from toddlers to those who looked like they’d been listening to electronic music since its early days. They warmed themselves over a wood fire that burned in a trash can in front of the stage. The movements of the band were obscure in the dim light but revealed the passion and dedication of the players. For roughly 30 minutes, the saxophones squonked and bleated on top of the propulsive, percussive dual-guitar attack. At times the drums offered a comfortable bed on which the other musicians could rest their contributions, while at other times it kicked their asses out of bed and drove them to work. 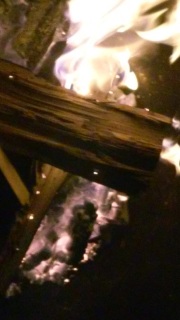 Among Bushwick’s incredibly diverse art scene, Secret Project Robot is a special space, well worth a visit for those in need of pot-fueled inspiration. And if you get the munchies, you’re less than 5 blocks away from delicious wood-fired pizzas at Union Pizza Works, 423 Troutman Street.