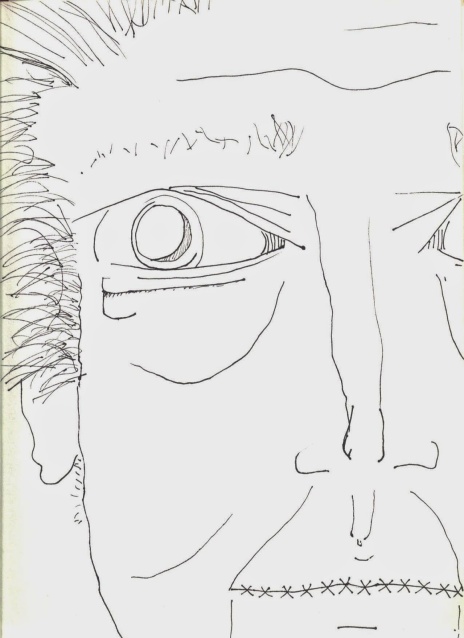 Andrew rubbed his eyes. They always bothered him these days. They burned and itched and teared up and dribbled down his sore red cheeks. It was hardly worth all the time and effort he put into breathing and eating and drinking and sleeping if he was going to have to put up with these eyes. And his lips weren’t much better.
His hair (what was left of it anyway) was his true pride and joy. It waved in the wind and hid his scalp from the sun’s most obnoxious rays. Even if it wasn’t as thick or as long as it once was, Andrew took comfort in the knowledge that it was more plentiful than it would be in the dismal days ahead.

His nose was bulbous, red and clogged. His ears were home to wax. fine black hair, and high-pitched crackling noises that kept him up at night. His teeth were crooked and cracked and (as previously mentioned) his lips weren’t much better. But it was Andrew’s eyes that were his biggest source of discomfort. He used them for winking and blinking and rolling and twitching. Sometimes he even used them to see things.

One night Andrew’s eyes were hurting so much that he decided to do something about it, so he carefully removed them and soaked them overnight in a homemade solution of water, baking soda, ginger, and crème de menthe. As he drove to work the next morning all he could think was: TGIF (Thank God It’s Foggy).
Moral: When people are used to using you as a doormat, don’t be surprised if you ask them to stop rubbing their boots on your face and they answer by telling you that you’ve hurt their feelings.