Paris was fascinating, profound and enlightening, everything you’d expect from the City of Lights, but it was not relaxing, and relaxation was the thing Martine needed most of all. She was overworked, like most of her contemporaries, and underappreciated, like most females. She held the world at arm’s length for fear of it overwhelming her with its salty waves. Her rendezvous with Henri, ill-timed and awkward, was the thing that finally tethered her to the pulse of the human race.

Henri was one of those men who saw it as his sacred duty in life to avenge his father’s humiliation at the hands of dispassionate existence. He was not going to follow those footsteps and let his life trickle away down the sewers of time, or watch it fade away without experiencing the love of a woman as fine as Martine. When he caught the sight of her skinny white legs scurrying across the Boulevard Saint-Germain he had no option but to follow them as far down the Rue de Pontoise as they would carry them both. 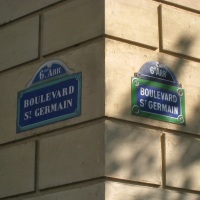 She spun on her heels so quickly that Henri had to hop on his tiptoes to keep from slamming into her. He almost came close enough to touch her nose with his. The terror in her eyes only made her more attractive. “What are you doing?” she yelled.

“You’re a fucking angel,” he panted, with all the impetuous honesty of youth.

She smiled very slowly. She looked away in confusion and then looked back again with more clarity. She liked what she saw. She relaxed. She stopped scurrying.