Skip to content
Alexander Solzhenitsyn stopped by to see you today while you were out. We talked for a while about Russian soldiers and all the women they raped in the waning days of the second world war and thereafter. Estimates run into the millions. Girls and women younger than eight and older than eighty, gang-raped, some until they were dead. The Americans did it too, as did the French and English, but none of them on the scale of the Russians. They raped Polish and even Russian women who happened to be trapped there, prisoners of the Germans themselves. They got it coming and going. One of their victims was 12 year old Johanna Renner who would later go on to marry the German chancellor Helmut Kohl, and even later to kill herself.
Solzhenitsyn said that Russia is a patriarchal society but that women are considered the spoils of war everywhere. It’s one of the reasons men go to war, he said. He also wanted to talk to you about the American reporter who was killed this week by the Saudis in their consulate in Turkey. He said the Saudis tortured the reporter before killing him and dismembering him with a bone saw. He wondered why the American government hadn’t criticized the Saudis but figured it was because Trump, like Putin, doesn’t have a problem with killing troublesome reporters. They don’t mind rape either: it keeps women in their place.
Solzhenitsyn said to tell you that he was sorry he missed you but that he was unable to wait around, he was due elsewhere. What could I do to stop him? He’s been dead for ten years. 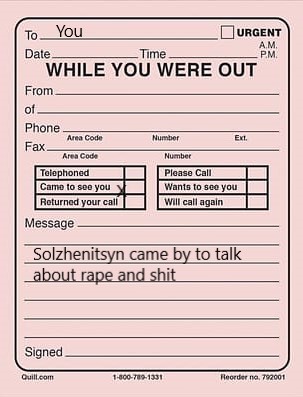