No writer ever inhabited the minds of his characters with more depth than Henry James. He possessed a unique ability to explore a character’s shortcomings with as much insight as he might with another’s dignity:
What they amounted to was an exquisite taunt of his mediocrity – a mediocrity which was, after all, not a crime. How could the Prince occupy himself, what interests could he create, and what faculties, gracious heaven, did he possess? He was as ignorant as a fish, and as narrow as his hat-band. His expression became pitiful; it was as if he dimly measured the insult, felt it more than saw it – felt that he could not plead incapacity without putting the Princess largely in the right.
He was able to find unexpected depth in the shallowest of his characters:
Sholto was a curious and not particularly edifying English type (as the Princess further described him); one of those strange beings produced by old societies that have run to seed, corrupt, exhausted civilisations. He was a cucumber of the earth, and purely selfish, in spite of his devoted, disinterested airs. He was nothing whatever in himself, and had no character or merit save by tradition, reflection, imitation, superstition. He had a longish pedigree – he came of some musty, mouldy ‘county family’, people with a local reputation and an immense lack of general importance; he had taken the greatest care of his little fortune. He had travelled all over the globe several times, ‘for the shooting’, in that brutal way of the English. That was a pursuit which was compatible with the greatest stupidity.
He was able to see the complex disparities in a single character:

But there was a grain of conviction in his heart that some kind of personal affinity existed between them and that it would torment him more never to see her at all than to see her go into tantrums in order to cover her tracks. An inner sense told him that her mingled beauty and grossness, her vulgar vitality, the spirit of contradiction yet at the same time of attachment that was in her, had ended by making her indispensable to him. She bored him as much as she irritated him; but if she was full of execrable taste she was also full of life, and her rustlings and chatterings, her wonderful stories, her bad grammar and good health, her insatiable thirst, her shrewd perceptions and grotesque opinions, her mistakes and felicities, were now all part of the familiar human sound of his little world.
And even to switch perspective between characters mid-paragraph:
Much as she liked seeing queer types and exploring out-of-the-way social corners, she never engaged in a fresh encounter, nor formed a new relation of this kind, without a fit of nervousness, a fear that she might be awkward and fail to hit the right tone. She perceived in a moment, however, that Mr. Vetch would take her as she was and require no special adjustments; he was a gentleman and a man of experience, and she would only have to leave the tone to him. He stood there with his large, polished hat in his two hands, a hat of the fashion of ten years before, with a rusty sheen and an undulating brim – stood there without a salutation or a speech, but with a little fixed, acute, tentative smile which seemed half to inquire and half to explain. What he explained was that he was clever enough to be trusted, and that if he had come to see her that way, abruptly, without an invitation, he had a reason which she would be sure to think good enough when she should hear it. There was even a certain jauntiness in this confidence – an insinuation that he knew how to present himself to a lady; and though it quickly appeared that he really did, that was the only thing about him that was inferior – it suggested a long experience of actresses at rehearsal, with whom he had formed habits of advice and compliment.
Equally adept at seeing the worst in people: 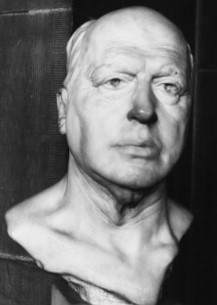 There were nights when every one he met appeared to reek with gin and filth, and he found himself elbowed by figures as foul as lepers. Some of the women and girls, in particular, were appalling – saturated with alcohol and vice, brutal, bedraggled, obscene. ‘What remedy but another deluge, what alchemy but annihilation?’ he asked himself as he went his way; and he wondered what fate there could be, in the great scheme of things, for a planet overgrown with such vermin, what redemption but to be hurled against a ball of co
nsuming fire.
And the best:
He had a high ambition: he wanted neither more nor less than to get hold of the truth and wear it in his heart. He believed, with the candour of youth, that it is brilliant and clear-cut, like a royal diamond; but in whatever direction he turned in the effort to find it, he seemed to know that behind him, bent on reproach, was a tragic, wounded face.
But his greatest talent was his ability capture and examine a moment of intimacy in all its shades of joy and pain:
‘Princess,’ said Hyacinth, clasping his hands and feeling that he trembled, ‘dearest Princess, if anything should happen to you’ – and his voice fell; the horror of it, a dozen hideous images of her possible perversity and her possible punishment were again before him, as he had already seen them in sinister musings; they seemed to him worse than anything he had imagined for himself.
She threw back her head, looking at him almost in anger. ‘To me! And pray why not to me? What title have I to exemption, to security, more than any one else? Why am I so sacrosanct and so precious?’
‘Simply because there is no one in the world, and there has never been any one in the world, like you.’
‘Oh, thank you!’ said the Princess, with a kind of dry impatience, turning away.
The manner in which she spoke put an end to their conversation. It expressed an indifference to what it might interest him to think about her to-day, and even a contempt for it, which brought tears to his eyes. His tears, however, were concealed by the fact that he bent his head over her hand, which he had taken to kiss; after which he left the room without looking at her.
Each time I crawled out of the bowels of Grand Central after spending a half hour with Henry James I couldn’t get to work without stopping, pulling out a pad, and trying my best to steer the ethereal ideas floating around me into some concrete, meaningful words. Inspiration comes from many directions but for me few are as direct as the feelings that flow from reading Henry James:
He had plunged into a sea of barbarism without having any civilising energy to put forth. He was conscious that the people were miserable – more conscious, it often seemed to him, than they themselves were; so frequently was he struck with their brutal insensibility, a grossness impervious to the taste of better things or to any desire for them. He knew it so well that the repetition of contact could add no vividness to the conviction; it rather smothered and befogged his impression, peopled it with contradictions and difficulties, a violence of reaction, a sense of the inevitable and insurmountable. In these hours the poverty and ignorance of the multitude seemed so vast and preponderant, and so much the law of life, that those who had managed to escape from the black gulf were only the happy few, people of resource as well as children of luck; they inspired in some degree the interest and sympathy that one should feel for survivors and victors, those who have come safely out of a shipwreck or a battle.