Skip to content
“We are accustomed to think of ourselves as emancipated people; we say that we are democratic, liberty-loving, free of prejudices and hatred. This is the melting-pot, the seat of a great human experiment. Beautiful words, full of noble idealistic sentiment. Actually we are a vulgar, pushing mob whose passions are easily mobilized by demagogues, newspaper men, religious quacks, agitators and such like. To call this a society of free people is blasphemous. What have we to offer the world beside the superabundant loot which we recklessly plunder from the earth under the maniacal delusion that this insane activity represents progress and enlightenment?” 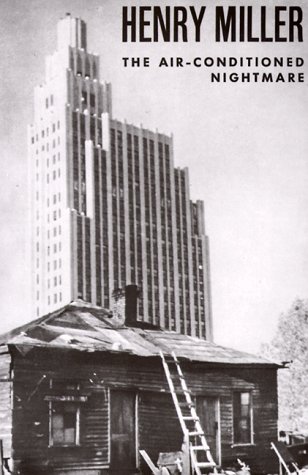 Henry Miller’s first book after returning from Greece where he wrote his favorite book, The Colossus of Maroussi, was 1945’s The Air-Conditioned Nightmare. He wrote the book in 1939 but held off publication until after the war as he was worried about being too critical of his country while it was engaged in a World War against something even worse. But his evisceration of American culture is depressingly relevant. In particular, his view that America, unlike the nations of Europe, does not appreciate the artist. In America art is just another commodity like cars, food, and sex, to be packaged and sold to the highest bidder. It’s a mentality that leads to the creation of people like our president: losers who think they are winners.
Some of America’s greatest art was created after The Air-Conditioned Nightmare, including literary works inspired by the risks Miller took and the breathtaking artistry of his prose. Our latest Nobel laureate, Bob Dylan, said in a 1966 interview that he considered Miller the greatest American writer.
“As to whether I have been deceived, disillusioned…The answer is yes, I suppose. I had the misfortune to be nourished by the dreams and visions of great Americans – the poets and seers. Some other breed of man has won out. This world which is in the making fills me with dread. I have seen it germinate; I can read it like a blueprint. It is not a world I want to live in. It is a world suited for monomaniacs obsessed with the idea of progress – but a false progress, a progress which stinks. It is a world cluttered with useless objects which men and women, in order to be exploited and degraded, are taught to regard as useful. The dreamer whose dreams are non-utilitarian has no place in this world. Whatever does not lend itself to being bought and sold, whether in the realm of things, ideas, principles, dreams or hopes, is debarred. In this world the poet is anathema, the thinker a fool, the artist an escapist, the man of vision a criminal.”

“The young man who shows signs of becoming an artist is looked upon as a crackpot, or else as a lazy, worthless encumbrance. He has to follow his inspiration at the cost of starvation, humiliation and ridicule. He can earn a living at his calling only by producing the kind of art which he despises. If he is a painter the surest way for him to survive is to make stupid portraits of even more stupid people, or sell his services to the advertising monarchs who, in my opinion, have done more to ruin art than any other single factor I know of.”
In one scene from the book a French artist and friend of Miller’s comes to America to avoid the war brewing in Europe but decides to go back. “’At first it was wonderful,’ he said. ‘I thought I was in Paradise. But after six months of it I began to be bored. It was like living with children – but viciouschildren. What good does it due to have money in your pocket if you can’t enjoy yourself? What good is fame if nobody understands what you’re doing? You know what my life is like here. I’m a man without a country. If there’s a war I’ll either be put in a concentration camp or asked to fight for the French. I could have escaped that in America. I could have become a citizen and made a good living. But I’d rather take my chances here. Even if there’s only a few years left those few years are worth more here than a lifetime in America. There’s no real life for an artist in America – only a living death. Buy the way, have you got a few francs to lend me? I’m broke again. But I’m happy.’”

In addition to his views on the artist in America, the other great theme of The Air-Conditioned Nightmare is the worldwide unraveling that was taking place at the time of its writing. A diseased mentality of racial superiority, of blood and soil, of Jews will not replace us, was infecting communities and nati
ons.
“A great change had come over America, no doubt about that. There were greater ones coming, I felt certain. We were only witnessing the prelude to something unimaginable. Everything was cock-eyed, and getting more and more so. Maybe we would end up on all fours, gibbering like baboons. Something disastrous was in store – everybody felt it. Yes, America had changed. The lack of resilience, the feeling of hopelessness, the resignation, the skepticism, the defeatism – I could scarcely believe my ears at first. And over it all that same veneer of fatuous optimism – only now decidedly cracked.”
The Air-Conditioned Nightmare is a book torn between revulsion at America’s materialism and hope in the abiding truth of equality that lives in the hearts of all people. All we need to do is stay woke and to trust the best in ourselves and each other. To Miller, it is the artist who will wake us.

Yesterday, after the President of the United States signaled his sympathy to the Nazi cause, the President’s Committee on the Arts and Humanities resigned en masse in a letter in which the first letter of each paragraph spelled R-E-S-I-S-T. Today President Trump announced he will not be attending the annual Kennedy Center Honors. These artists, like those that came before them, are performing the delicate balancing act of simultaneously dreaming and staying woke.

“If you have a dream of the future know that it will be realized one day. Dreams come true. Dreams are the very substance of reality. Reality is not protected or defended by laws, proclamations, ukases, cannons, and armadas. Reality is that which is sprouting all the time out of death and disintegration. You can’t do anything to it; you can’t add or subtract, you can only become more and more aware. Those who are partly aware are the creators; those who are fully aware are the gods and they move among us silent and unknown. The function of the artist, who is only one type of creator, is to wake us up.”