We’ve been down this road before: an unhinged, paranoid president; wars built on lies; emboldened racists and misogynists blaring their hate through mass media into the public forum. Fifty years ago this summer, a new way of confronting institutionalized madness was proposed in San Francisco. And it spread.

Each generation finds a way to distinguish itself from its predecessors and there is no way to do it more striking than fashion. The generation that came of age in The Summer of Love made their mark with a combination of exploding colors, eclectic fabrics and a return to the traditional clothing of peasants, working people, and global cultures.

We tend to think of uniforms as something worn by soldiers and ballplayers, but we all wear uniforms. The uniform of the hippies was born of necessity. Young people with little money turned to second-hand and army/navy stores looking for cheap clothes and wound up with the leftovers from another age: granny dresses and boots, cowboy hats, t-shirts, peasant dresses, and lots of denim. San Francisco’s Levi Strauss & Co created the first blue jean in 1873 and when boutique owner Peggy Caserta saw that her customers were slicing the seams of their jeans to fit over their boots she went to the Levi’s factory on Valencia Street and asked them if they would custom make some jeans for her with a wider opening at the ankle. Overnight it seemed like half the world was wearing bell bottoms.

In addition to traditional working and peasant clothes, the hippies incorporated he fashions of cultures as disparate as African (dashiki), Asian (tie-dye) and Native American (fringes) in their uniforms. The fashion of the times went beyond clothing. Men grew their hair longer and stopped shaving; women rejected the restrictions of bras, girdles, and stockings; and both adorned their clothes with buttons, badges, and patches. Art, politics, and humor all became appropriate concepts to express through fashion. 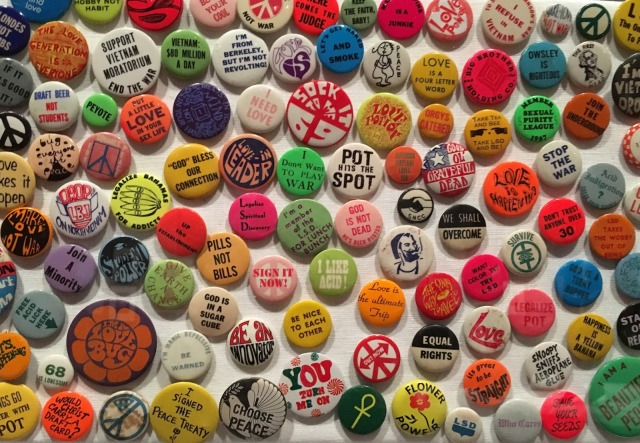 One of the most impressive features of The de Young Museum’s Summer of Love Experience exhibit is the collection of fashion artifacts from the creative outfits of rank-and-file hippies to Wavy Gravy’s jester outfit, Janis Joplin’s purse, and Jerry Garcia’s Captain Trips top hat.

NEXT UP: VISUAL ARTS