Skip to content
“By far the most extraordinary person the human race has ever produced.”
Mark Twain on Joan of Arc 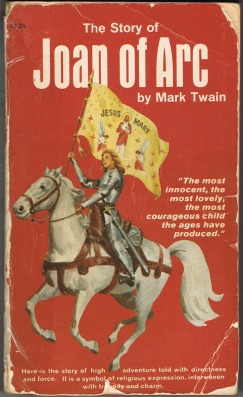 When Mark Twain wrote Personal Recollections of Joan of Arc in 1896 he was 61 years old and madly in love with his teenage heroine. While reading this book more than a century later, it’s hard not to share his enthusiasm.

It was the last novel published in his lifetime and he considered it his best. The reasons are obvious: the maturity and detail born of more than a decade’s research show the expert hand of a master of his craft. But what makes this book his favorite is his love for its subject. It’s hard to imagine Twain loving any of his characters more than he loved Joan of Arc.

“She was sixteen now, shapely and graceful, and of a beauty so extraordinary that I might allow myself any extravagance of language in describing it and yet have no fear of going beyond the truth.There was in her face a sweetness and serenity and purity that justly reflected her spiritual nature.”

George Bernard Shaw, in the preface to his play Saint Joan, writes of Joan and Twain, “She makes her creator ridiculous, and yet, being the work of a man of genius, remains a credible human goodygoody in spite of her creator’s infatuation. Mark Twain writes his biography frankly in the form of a romance.”

Personal Recollections of Joan of Arc was originally serialized in Harper’s Magazine under the name of the Sieur Louis de Conte, the story’s narrator, because Twain was worried that his reputation as a humorist would prejudice the audience against the seriousness of the story. Genius is a hard thing to hide though and it was recognized as his work almost immediately. Although not as well regarded in his time or ours as The Adventures of Tom Sawyer and Huckleberry Finn, there is no lack of genius is this book. It is genius inspired by adoration. As a man who had publicly repudiated religion, he was able to find a nearly-religious devotion to The Maid.

Near the end of his life, Mark Twain formed a club for girls aged 10 to 16 with whom he corresponded and hosted at the manor he named Innocence At Home in honor of his “Angelfish.” He wrote that the club was his “life’s chief delight.” It might seem creepy for an old man to find comfort in the company of girls but that’s an attitude retroactively applied from an age that has sexualized childhood. I believe Twain’s delight came from something much simpler: memory.

“As, she was so beautiful, and oh, so sweet! I had loved her the first day I ever saw her, and from that day forth she was sacred to me. I have carried her image in my heart for sixty-three years – all lonely there, yes, solitary, for it never has had company – and I am grown so old, so old; but it, oh, it is as fresh and young and merry and mischievous and lovely and sweet and pure and witching and divine as it was when it crept in there, bringing benediction and peace to its habitation so long ago, so long ago – for it has not aged a day!”