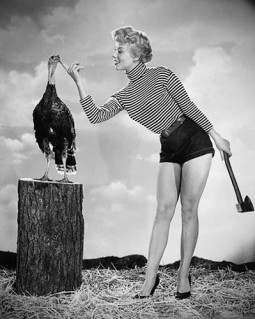 Forty years ago today, I became a vegetarian. The turkey fetish was a big part of what pushed me to finally follow my heart and forego the consumption of flesh. I also met a young woman that year who was a vegetarian. Before her, vegetarians were an exotic breed like albinos or Buddhists. She gave me a living example of something that had previously existed only in theory for me.

For a few years after I gave up turkeys and chickens and cows and pigs, I still ate fish. Eventually, even fishy flesh became unappetizing. I’ve never missed eating meat. Once you stop seeing it as food it’s hard to imagine going back. I don’t miss crawling either.

When I think of the differences between the way people choose to live and their most fundamental beliefs, I think of my vegetarianism as an unpopular philosophy. Thanksgiving is a time for people get together with their families to share a grand feast. This year especially, with the election of Donald Trump as president, there are bound to be family gatherings made tense by deeply divergent philosophies on fundamental matters. That’s OK. The most important thing I’ve learned by being a vegetarian is: People don’t need to think the way I do for them to be good people.