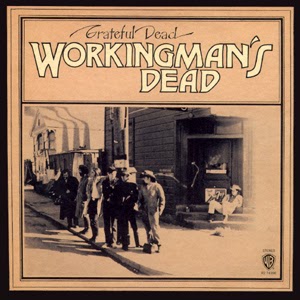 I’m officially moving back from the takers column to the makers. I’m going back to being a Workingman.

45 years ago this month the Grateful Dead went into the Pacific High recording studio in San Francisco and recorded 8 songs that they released under the title Workingman’s Dead. Every song on it was written by Jerry Garcia and/or Robert Hunter.

Garcia/Hunter rank with Lennon/McCartney, Jagger/Richards, and John/Taupin as one of the great songwriting teams of rock music. It was announced last week that they will join those others in the Songwriters Hall of Fame. It’s an overdue honor for the team who contributed Uncle John’s Band, Casey Jones, High Time, and Dire Wolf to Workingman’s Dead. Before the year was out they’d add Sugar Magnolia, Friend of the Devil, Truckin’ and Ripple (among others) to their songwriting output for 1970.

It’s hard to pick a song to represent their songwriting talents, but you could do a lot worse than the brilliant Uncle John’s Band.

Well the first days are the hardest days, don’t you worry any more,
Cause when life looks like easy street, there is danger at your door.
Think this through with me, let me know your mind,
Wo, oh, what I want to know, is are you kind?

Goddamn, well I declare, have you seen the like?
Their wall are built of cannonballs, their motto is “don’t tread on me”.

Come hear uncle John’s band playing to the tide,
Come with me, or go alone, he’s come to take his children home.

It’s the same story the crow told me; it’s the only one he knows.
Like the morning sun you come and like the wind you go.
Ain’t no time to hate, barely time to wait,
Wo, oh, what I want to know, where does the time go?

I live in a silver mine and I call it beggar’s tomb;
I got me a violin and I beg you call the tune,
Anybody’s choice, I can hear your voice.
Wo, oh, what I want to know, how does the song go?