If you’ve never been and it looks like something you’d enjoy, you should check it out next year. It’s always held at the beginning of Autumn and it always starts with a parade.

The parade doesn’t always have dragons, but this year it did.

Some of the men (in this case members of the USA Knights of the Armored Combat League – yes that’s a thing) like to hack at each other with swords and maces and such.

Some of the women (in this case members of the New York Celtic Dancers) like to dance in the sun. 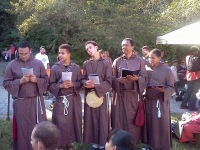 There’s chanting and playing of any number of instruments that might have been played in the Middle Ages.

Some things – like pretty maids eating mutton joints, and the quaffing of ales – are timeless.

And what’s a Medieval Festival without a puffy shirt?

Or a gorgeous sunset over the Hudson River?