I picked up a 20 pound turkey and stuffed it in the fridge yesterday. Is it heresy for a vegetarian to not be bothered by that? 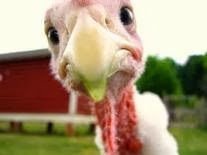 Birds are different, right? Fish and fowl are not the same as cows and pigs and the other animals our species eats: rabbit, deer, and the occasional reptile or amphibian. Maybe the reptiles and amphibians are more like the fish and fowl, we can call them what they are. We can eat snake or frog’s legs, like we can eat salmon or turkey, but we can’t eat pig or cow. We have to eat pork or beef instead. Some animals are far enough removed from us to make them acceptable as food names. It’s the big mammals – the cows and the pigs – that made the whole meat-eating thing too difficult for me, psychologically. And you have to draw the line somewhere. Being an extremist, I draw the line well this side of the big stupid bird.

There’s always this question with eating birds too: what if the big bird is the big bird?

Even dairy’s tough for me now. Especially as it’s a staple of my diet, and I enjoy it, and it’s one of the worst things I eat. And I can’t escape the knowledge that the same large mammals that I can’t stomach eating are being caged, tormented, drugged, distorted and squeezed dry to produce the milk necessary for the shaved parmesan that melts on top of my pasta primavera.

One of the solutions for vegetarians are the processed meat substitutes, usually made from some variation of tofu. But here’s the big problem with Tofurkey for me: I don’t eat food that has “furk” anywhere in its name.

Birds aren’t so different, really, except they can fly. But they can’t fly far enough to escape Thanksgiving.